Trail running has its special magic. It is mostly quiet with no cars and traffic to contend with. The scenes appear to change every few meters and you seem to be in sync with nature itself, appreciating unspoiled woodlands, rivers, vegetation and the like. Expect the unexpected as many experienced trail runners would fondly advise. The jazzrunner and his running friends were in for a surprise as the trails would lead to uphill mountain ridges, rock climbs and a great view of the Angat river basin and dam.

Last Sunday, we hied off to San Jose Del Monte (SJDM) in Bulacan to pick up non-running friends who were our main contacts in order to gain entry into the heavily secured Angat Water Dam and Reservoir. This Reservoir is strictly off limits to the public except when special requests are made in advance for groups who wants to tour the place. So Darryl, June and myself met up with Edwin Ang, our point man (June’s friend) and Joel Salazar, our main man who knew contacts inside the reservoir who would let us have access inside the reservoir.

We left SJDM at 6:00am and arrived at the first main gate of the reservoir at about 6:30am. Both reservoir and dam are located at the Angat River in San Lorenzo, Norzagaray, Bulacan. Its main purposes are to supply water in Metro Manila, provide irrigation for the provinces of Pampanga and Bulacan, to reduce flooding to downstream towns and villages and to generate hydro-electric power to feed the Luzon grid.

There are 3 main security checkpoints before we could reach the reservoir itself. We started our run at the first main security gate where we left June’s car which would be later driven by Edwin to follow us wherever we went.

Running up to the view deck

The deck was about a kilometer away from the entrance

We ran up to the main view deck where you could see a bird’s eye view of the reservoir.

With June on left 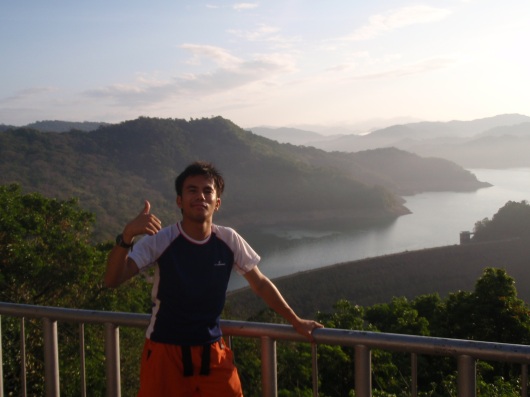 Darryl with the best view

From the view deck, we would later run down on the mountain slopes where lush green trees and other fauna were on both sides of the road, similar to those of back wood roads in Baguio City. 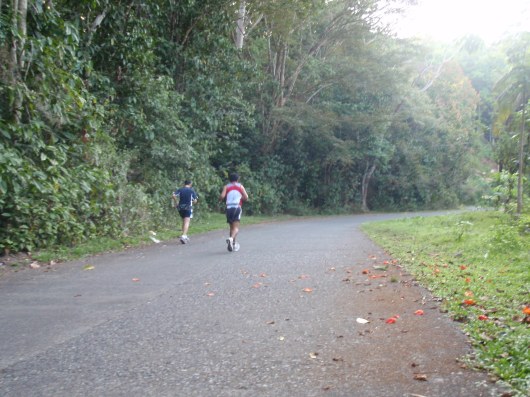 Air was still cool at this point

From the main road, we would enter trails that offers challenges in navigating its different terrain. We had to traverse dirt, pathways of dry leaves, grass, rocks and roots. Unlike running on paved roads in big cities, running trails is rarely monotonous.

Start of the trail run

There were even choices on what trail to run on. We chose the left trail

Meeting a native of the place

It was a good day for a run, the early morning breeze was cool but the sun was about to come up. We all came prepared with our hydration belts, trail shoes with both June and Darryl wearing their caps on.

At the foot of another dam, the Ipo Dam 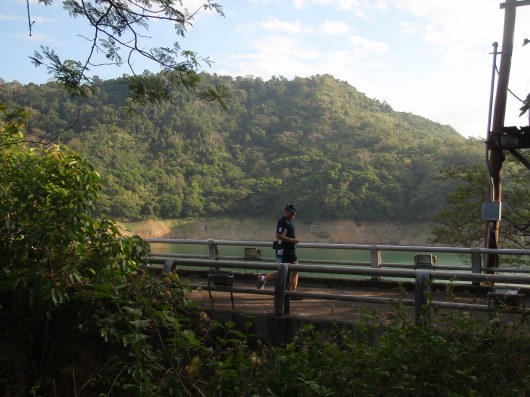 Our hosts, Edwin (second from left) and Joel (right). Once upon a time, i weighed nearly as much as Edwin's 🙂

After coming in and out of different trails, we were lead back to the main road which was now all 3kms of downhill. We were now running along another bridge way just atop the spill way. The view here was magnificent like we were on a lake somewhere in Europe. 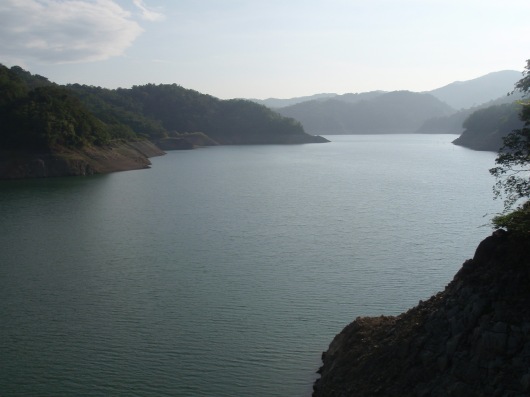 The main reservoir in all its magnificence

Running near the dam's edges

More trees along our run

Shade of trees kept us cool 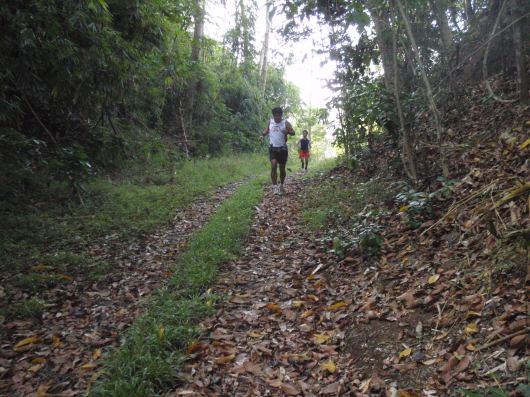 Another trail among many others 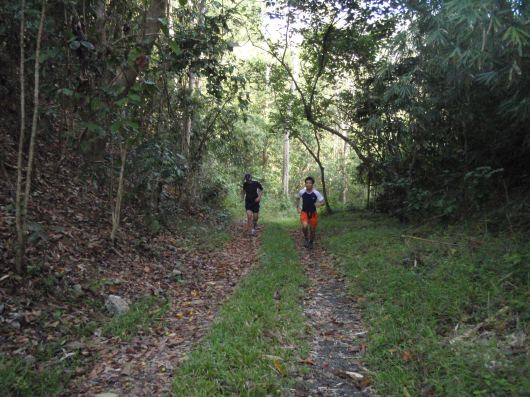 Tall trees to keep us company

Unto another wooded area

Small rocks and roots were now all over the place

Resting atop the turbines 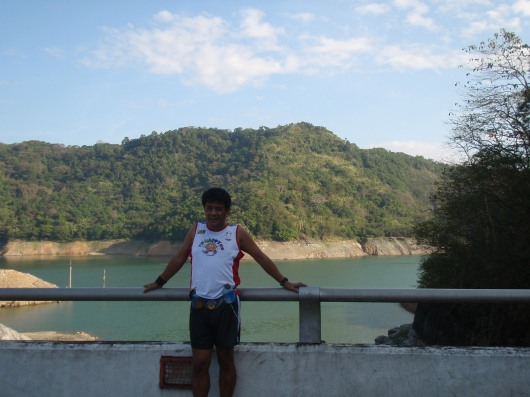 Posing on the bridgeway

Resuming our run on another trail 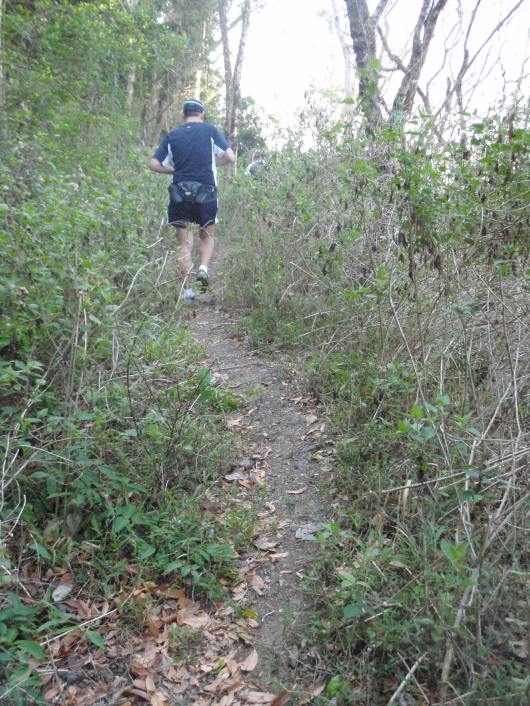 Pumping for the top

No way but up 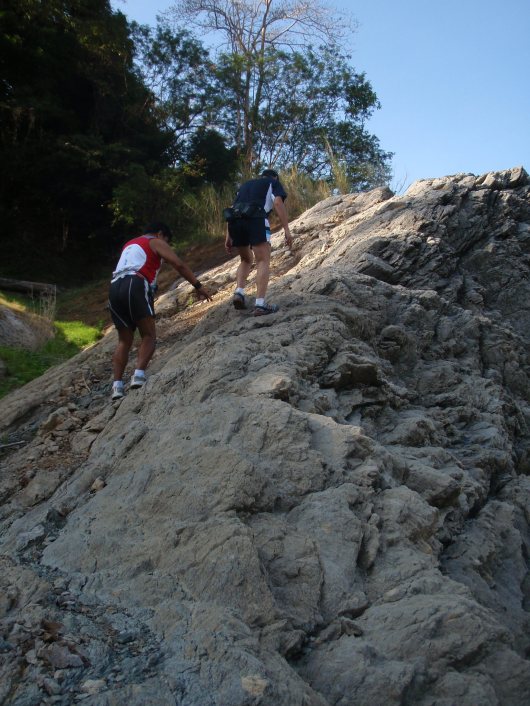 Making our way to the top 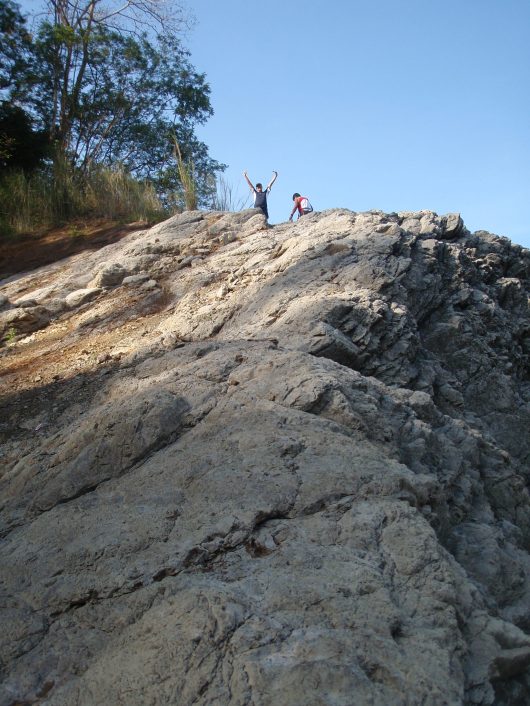 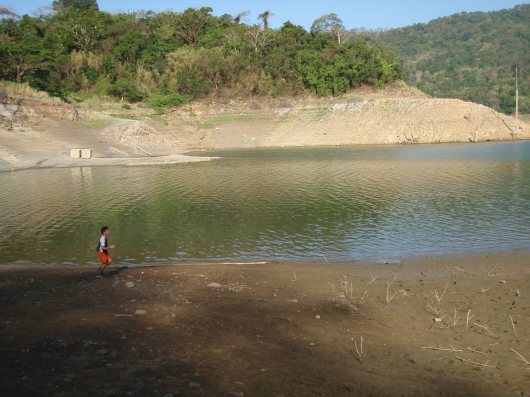 The bane of trail running. A prelude to TNF trail race at Secobia? 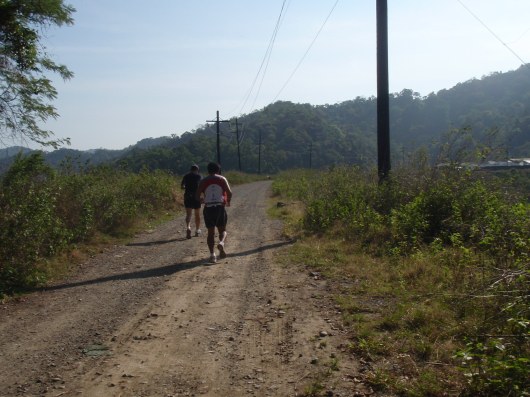 Back on the dirt roads 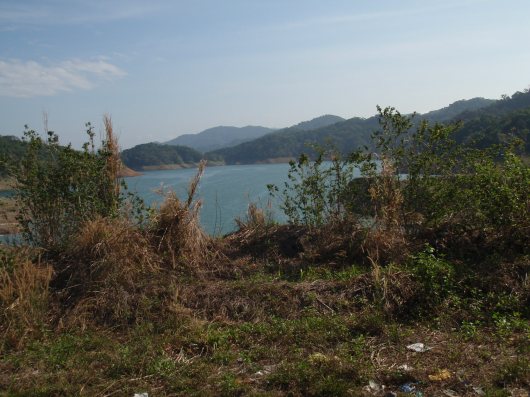 An opening towards the lake 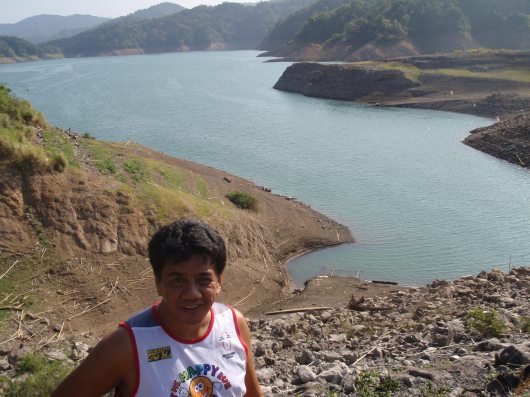 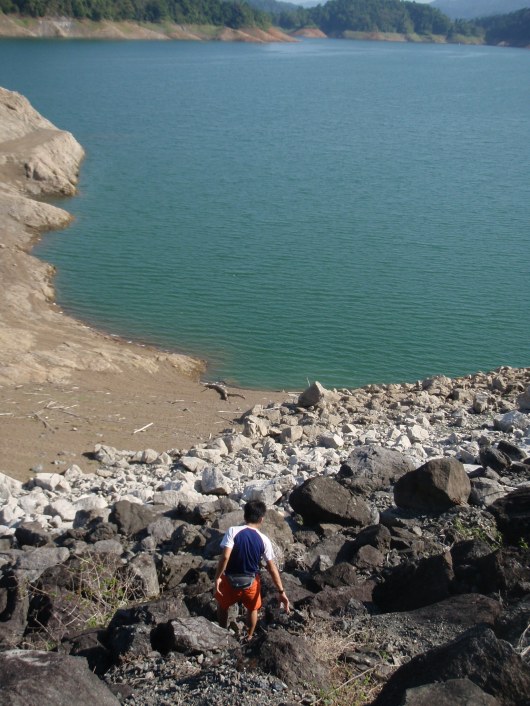 Navigating thru huge rocks to get a better view

My turn to push down

More rocks on way down

Now sprinting towards the top of the ridge 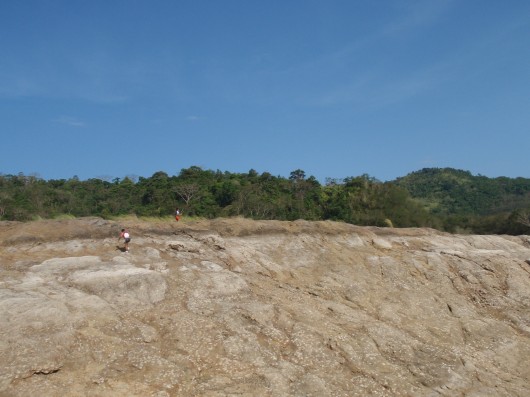 Nearing the head of the ridge 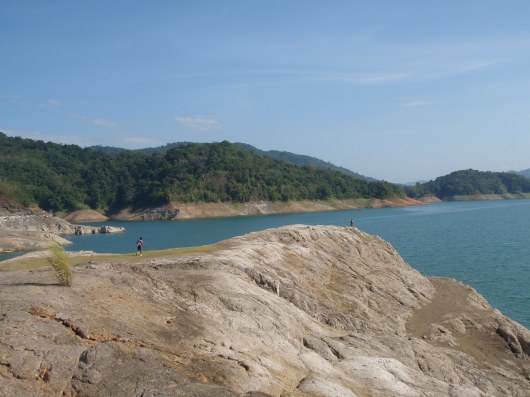 Sprint towards the end!

View at another angle

June, at peace with himself

Darryl, testing the edges of the ridge. No way i'd do this! 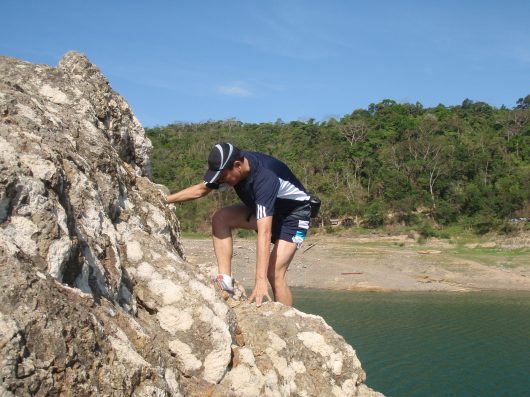 Another memento with June 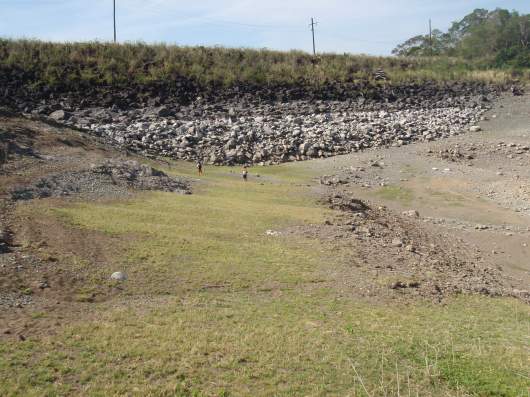 Running back to main base

On my way back 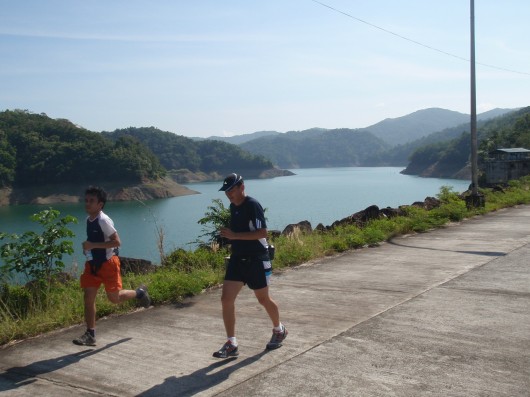 June and Darryl in tandem 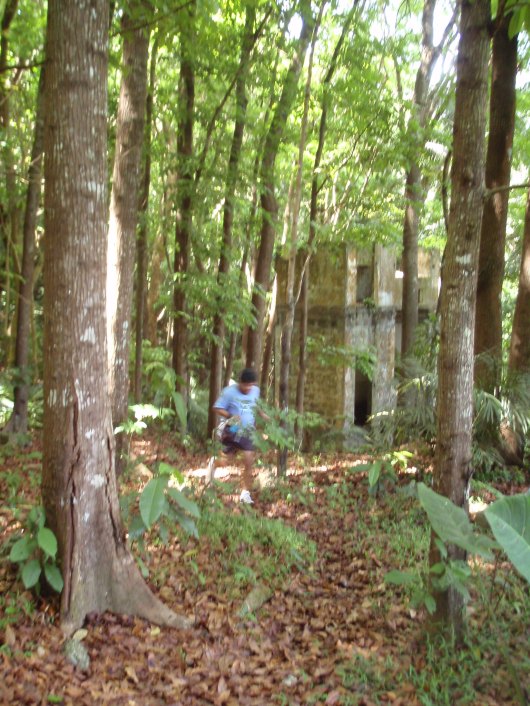 Emerging from the woods for cooldown

Our main man Edwin preparing fire to cook our lunch

And now, the best part...set on banana leaves, our lunch consisted of broiled tilapia and dalag fresh from the Angat River, Rice, Shrimps, Bulalo, Tomato Salad and Pesang Dalag

It was one of the most exhillirating trail/mountain runs we ever had and one of the most scenic. On this run, we had forgotten to track our time but time was not of the essence here anymore as we had before us spectacular views we wished would have continued on and on.

Our heartfelt thanks to Edwin Ang and Joel Salazar for their support and friendship for without them, this run would not have taken place.

We’ll see you on our next trail run.

THIS RUN IS DEDICATED TO THE COURAGEOUS PARTICIPANTS OF THE 1ST BATAAN DEATH MARCH 102K ULTRAMARATHON RACE THIS COMING SUNDAY, APRIL 05, 2009. GOOD LUCK AND SUCCESS TO YOU ALL!!!

10 responses to “Trail / Mountain Run At The Angat Reservoir, Bulacan”