Picking up a trail among the dozens of forest trails in San Jose Del Monte, Bulacan is a challenge.  We initially planned to go to Licao-Licao to explore its rough roads and trails but vehicles were not allowed to go past Ciudad Real (CR), another wide forested area that leads to Licao2 as CR has been off limits to vehicles. Nevertheless, we settled to cover Ciudad Real instead, which is just a few hundred meters north of the boundary with North Caloocan.

Start of the run from the entrance of Ciudad Real 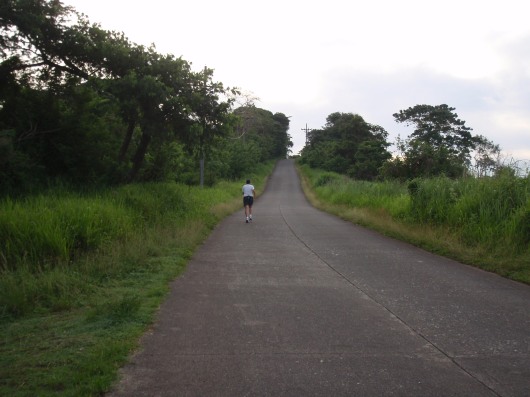 I’ve never read anything about running on Ciudad Real’s trails on any blog but rest assured, this 18km stretch of trails ranks right up there with the best i’ve ever ran. So why is it amongst the top of my list? Because these trails embodies everything that is great about trail running: rough and cragged tracks, uphills, solitude, post card sceneries and the one element that every asphalt, cement or tartan strider should experience: adventure.

Ciudad Real has it all.

Starting at the checkpoint entrance where a guard house is stationed, you warm up with an easy 2 kilometer jog of slightly rolling terrain, enjoying the greenery on your right side until you see a green-colored steel gate on your left. I don’t know why they bother to lock this gate (maybe to prevent 4-wheel vehicles from passing through?) when there are two small side openings where you can freely enter. Upon entering, you’ll immediately see the trailhead where the adventure begins. So, last May 3, running partner JUNE SANTIAGO and myself, each clutching a digicam headed off, not knowing what to expect. 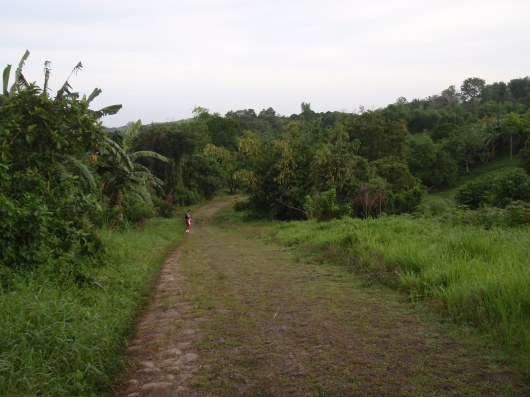 Start of the trail 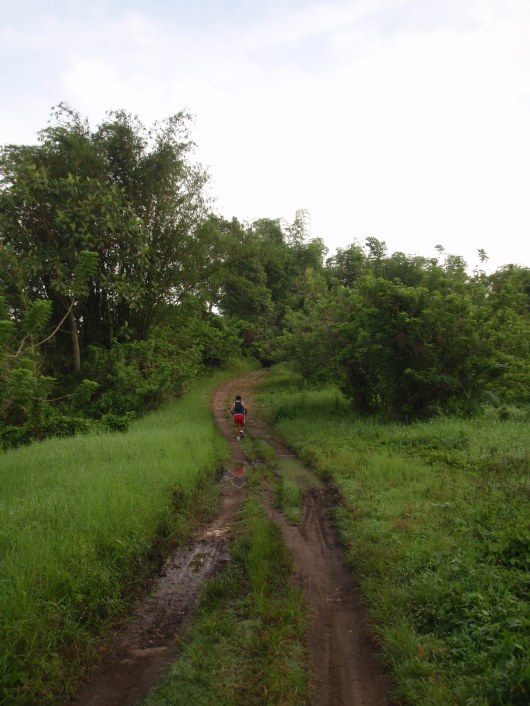 Towards the inner sanctum of the trail

A few words of caution, though. This isn’t your ordinary mud, sand or small gravel pathway where you just let your road or all-terrain shoe do the work for you. Protruding from the ground are jagged rocks and small ledges partly embedded so part of our visions were transfixed on the rocks as a slip-up could mean a serious ankle sprain.

Notice the jagged rocks of the track

The trail run begins with a moderate downhill passing isolated nipa huts. A few minutes later, we passed by a stud farm (reportedly owned by the Araneta family).  From here, its a long cautious run that never bores due to the numerous ledges, rocks and goat dung that were intermittently scattered. Yes, you’re going to suffer the smell of goat’s dung but then, after a few minutes, you’ll be able to breath some fresh air again and take in the scenic views of the valleys. 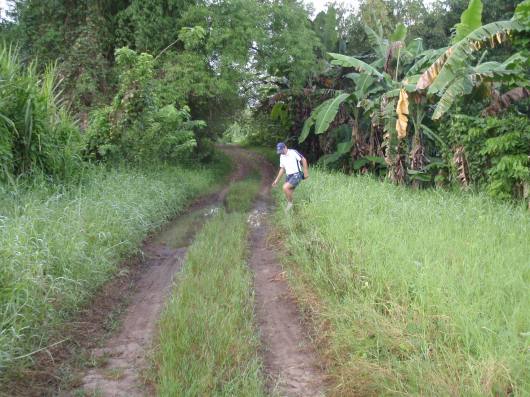 June skirting away from the trail. Didn't want his new Pegasus 25+ to get wet! 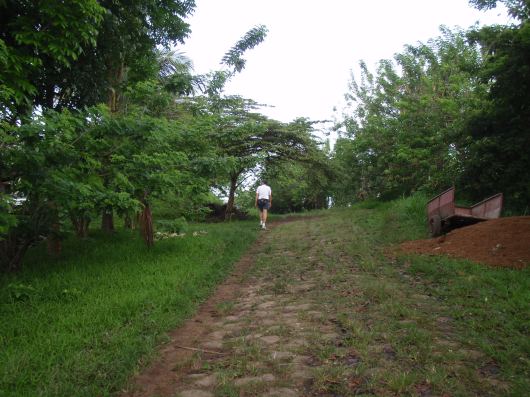 Once he sees a dog, he stops! 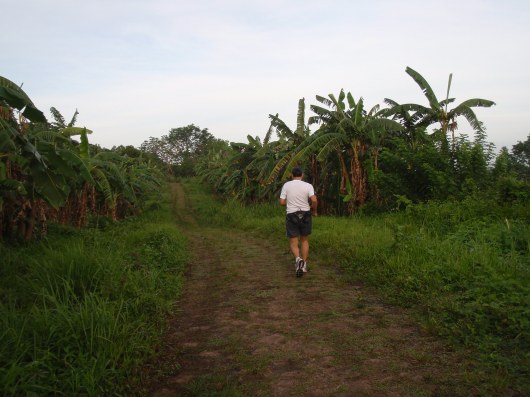 We continue our run

Turning right on a T-bone junction 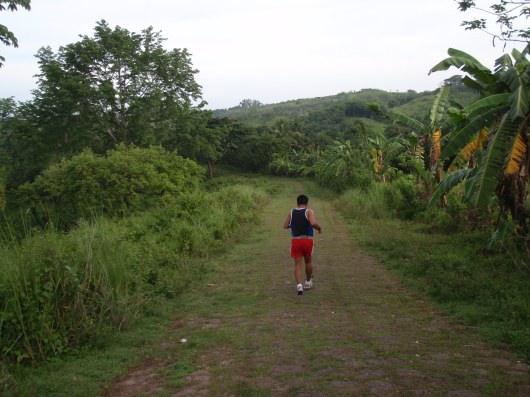 Green fields and beyond

Asking directions from a farmer

Seven kilometers into our run

What makes this trail so challenging is the continuous rocky terrain. You hop, sidestep, and weave minute after minute along rows of immaculate green fauna.

Not much of muddy potholes nor Parawagan-like steep hills to climb here. It’s just one blur of bushy, old growth foliage. 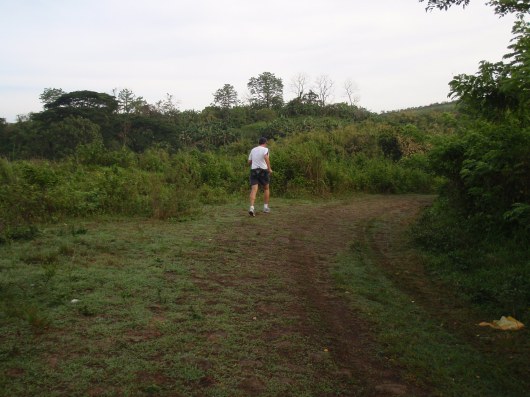 In the middle of a double track

A funny incident is about to happen here. See picture below 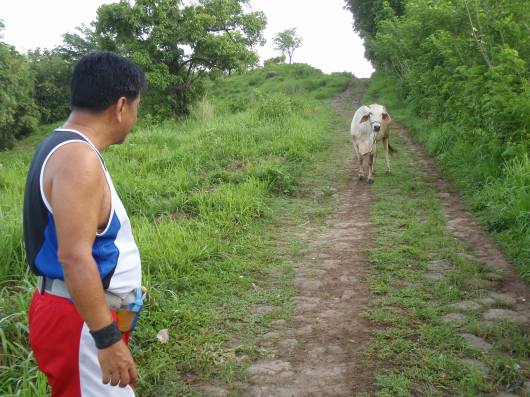 A cow quietly grazing at the left side of the trail suddenly rushes to the middle of the track and steadfastly blocks our path as if to say we can't run inside her territory! We stood there for 3 minutes not knowing what to do but we were prepared just in case it runs after us. We tried to sneak in to its left but it would move too on that side to block us. She did the same when we tried to sneak on its right. We laughed nervously as she was trying to play "patintero"! After another 3 minutes, it finally leaves and lets us run to freedom! 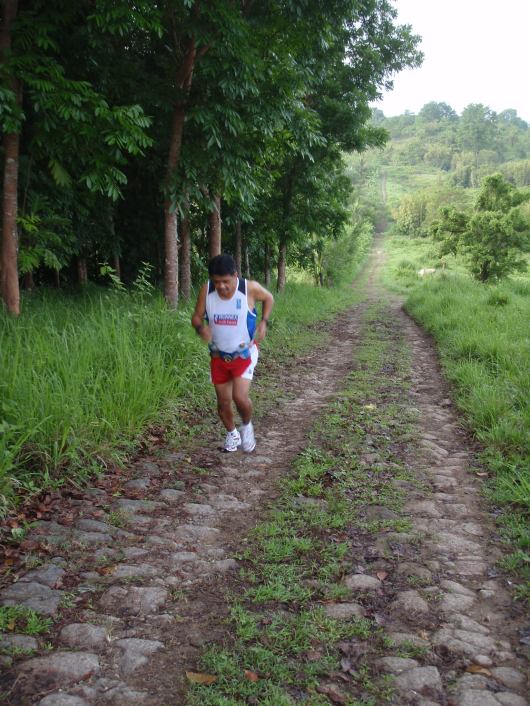 Almost at the crest 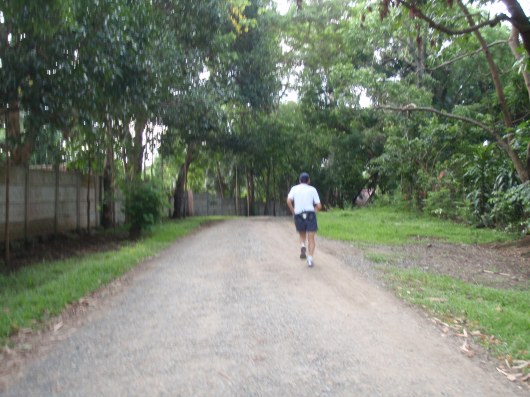 Beyond the green horizon 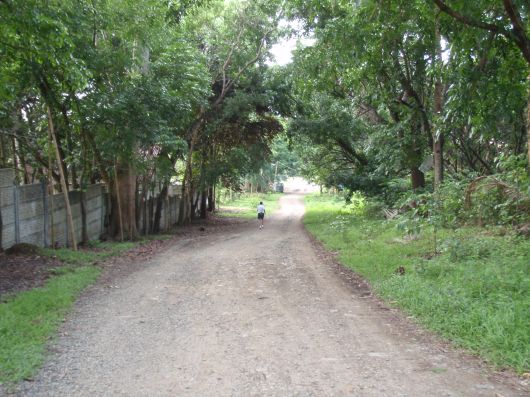 Arriving at the Agustinian Catholic Church and Monastery

With one of the Church's caretakers

Still running as far as we can see

Road that forms like a hair style parted in the middle.

We'll be charging that uphill soon 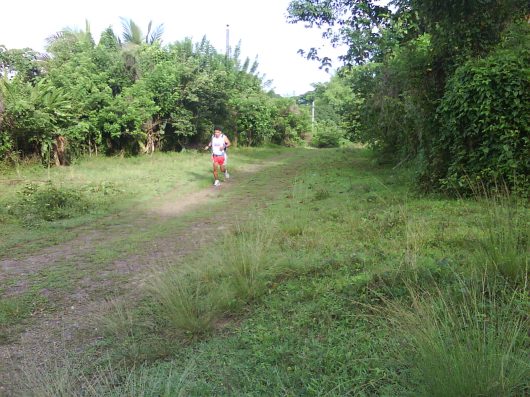 Emerging from the hill 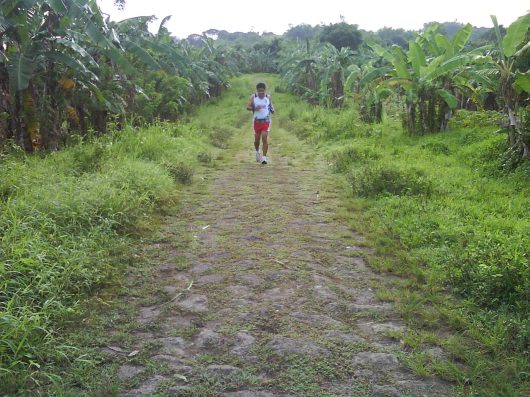 Seeing those banana trees sure made us hungry 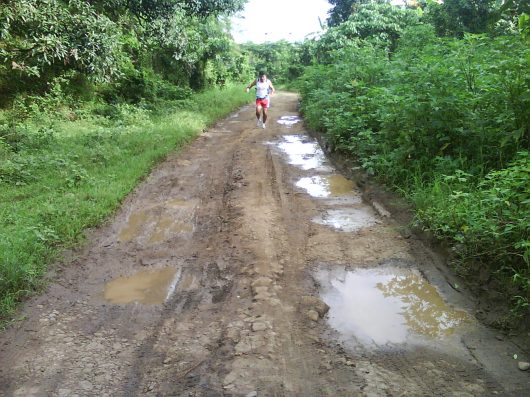 Good thing the road had dried up

On to the singletrack trail 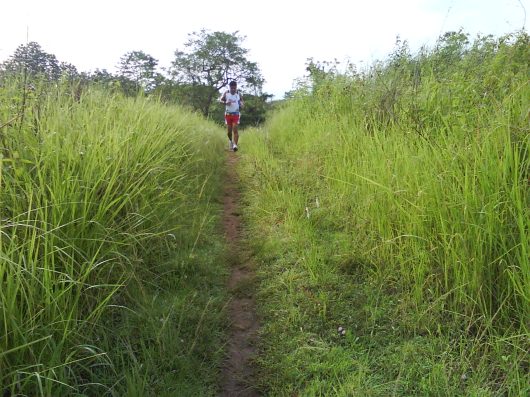 Couldn't be more detailed than this 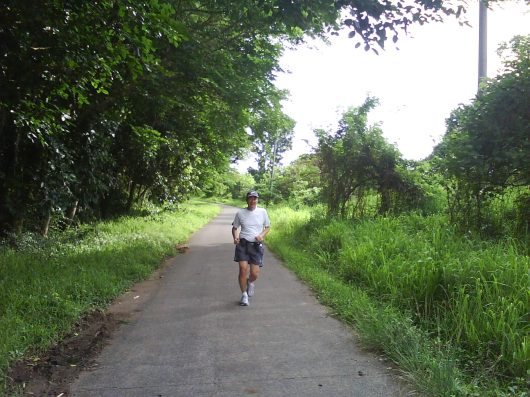 Exiting to a paved road at last

Another stop over in a monastery, the Blessed Sacrament Novitiate

On our way back 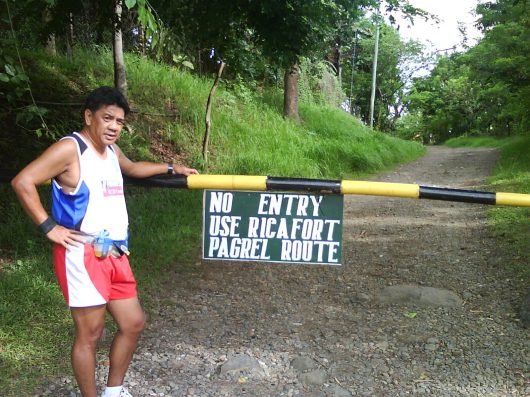 Another trail, no guard. Maybe next time

Shade of trees kept us cool

The trail run ends on to a cement road and from here, it’s about a 2.5 km cool-down back to the car.

When all is said and done,  we had ran through 4 Barangays (Purok 8, Pagrel, Carmel Farms, Ricafort), 2 Monasteries (Augustinian, Blessed Sacrament), been witness to scores of cattle herds, meek stares of rural folks and the floating feeling of a runner’s high.