The above photo sums up our finish when we towed lady runner (#74) who was barely conscious, to the finish line. Me and Prince (runner holding her at right) who ran together for the last 10kms were rushing to the finish to salvage some rather dull race earlier when this lady overtook us, 1.8kms from the finish. I noticed then her running in zigzags, a pronounced back kick as if she were playfully trying to ease-off the fatigue she was feeling. Then 300 meters later or 1.5kms from the finish, she began to wobble while talking to a friend so Prince and i rushed to her as she was about to collapse.

In the nick of time, we grabbed her before she fell down. Her friends, following in a van rushed to us as they poured water and tried to feed her some chocolates as she could barely talk. At this point, we were already signalling the paramedics who were 300 meters ahead to come and aid us. When we asked her if she wanted to ride on the van, she answered with a fierce, “No, i want to finish the race”! When the paramedics on bicycles and on ambulance arrived to assist, one of them suggested that they immediately administer first-aid, but she was adamant, trying to cling to us not to let go.

Her legs were wobbly so we had to straighten her up several times and walk very slowly. We were trying to encourage her to be brave, be conscious as she was being poured water and given ammonia to sniff and breathe exaggeratedly. Some arguments ensued with the medics as they tried to end her run with about 600 meters to go.

Her friends or relatives who were walking with us throughout her ordeal even discouraged the medics and asked them to give her her fight. As she was clinging to me, i felt that she was very determined, given the almost nil energy that she had left. Some of the medics understood and relented. They were runners too.

It was near to 10am and the sun was really hot and piercing. Earlier, i had my own slew of debacles and had to rely on the kindness of runners and medical stations on the course. I was running according to plan and ran at a conservative 7:00min/km. I hit the 10km mark at 1:08:30 and that was fine. We ran on mostly back roads and small barrios although 70% of the course was concrete. I was feeling fine as i paced with Obett Alano, another Runnex member who later left me to run his regular faster paced running.

I hit the 21k mark at exactly 2:24.00, still on pace and if i could only maintain this up to the finish, i could “maybe” aim for a 5-hour finish. Then disaster strucked. At km 23, just when we were about to cross a steel bridge, my right calf when into spasm so severe that i had to stop on my tracks, limped to the side railings of the bridge and lifted my leg to massage it. It only aggravated the twitch so i just stretched the calf instead. Ha! There goes my 5-hour marathon time! I limped back to the road and walked until i could trottle into a slow jog.

The major attack came a kilometer later when the spasm came back, the pain was so excruciating that runners noticed the grimace in my face and asked if i was ok. I was then under a shed when i tall guy runner stopped for me and pushed my toes forward to give my calf a stretch. I didn’t want to take so much of his time so i thanked him and encourage him to continue his run. As i sat down in the steel chair, still reeling in pain, a kind lady runner who may have recognized me as she uttered my name, came over and offered me an Electrolyte capsule. Even if i wasn’t dehydrated or spent up, i drank the capsule and would have taken anything that was offered just to alleviate the pain. A runner from the Fairview running club also sprayed some pain killers into my calf. Thanks to all of you!

It was all downhill for me from then on. I had to walk and run and stopped at two other Medical stations just to have my legs massaged. It was at the 33rd kilometer when ultrarunner, Prince overtook me and we ran side by side and employed the “Gallowalk” method, walking some then running some more. At the 39th kilometer, just before the water sports lagoon, we decided to hasten the pace knowing we were still well before the 6 hour mark when we encountered lady runner #74.

Our personal ambitions was now out of the question as helping out this distressed runner became our priority. At the last kilometer, we were now surrounded by other runners, medics and an ambulance…with the runners shouting encouragement to this lady runner. She would slid down and we would pull her up time and again. Prince and i were also shouting encouragement at her and she would muster the last straw of her stregnth to straighten up and walk! The cries of support from the crowd were deafening: “300 meters to go, you can do it”!, “200 meters, 100 meters…”. At the last 20 meters, she miraculously straightened her stance, regained some vigor and was now the one dragging us forward, her guts and sheer will all evident, a fighter through and through! She stopped at the rubberized finish line and offered her head to the lady marshall who quickly placed her medal around her neck. Prince got his and i got mine.

This is her first marathon.

It took us all 18 minutes to negotiate that last 1.5 kilometer stretch. We crossed the finish at about 6:04! haha…! She was later brought to the Mother Seton Hospital in Naga City for precautionary tests. I hope she is fine. 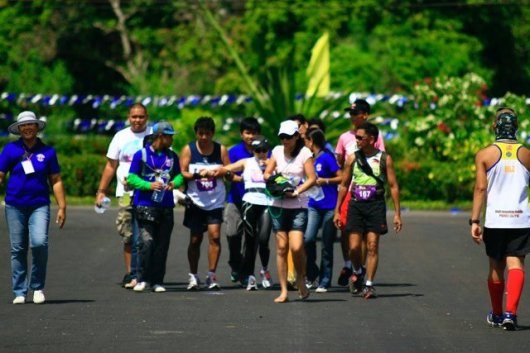 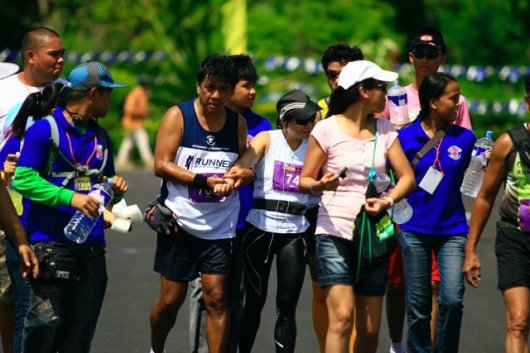 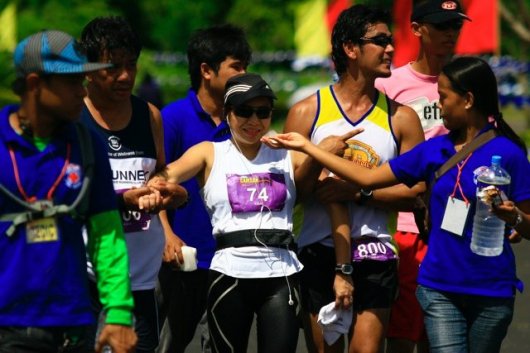 The finish time didn’t matter anymore to both Prince and I. What mattered most was to help a co-runner achieve the crowning glory that she deserved. I know, because i was a help recipient from kind-hearted runners as well who were compassionate enough to let me keep going . It was my turn to return the favor to others! 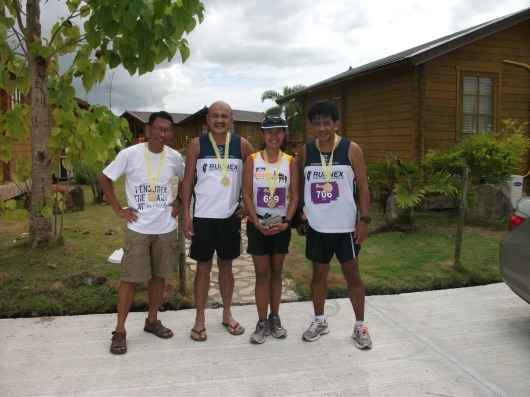 (Other photos by Brando Losaria. Thanks Brando)