Yesterday’s KOTR 10k race was probably the biggest aggregation of 10k runners i have ever joined in and hearing the announcer’s tally of 4,600 10k runners registered for the start, i was a bit overwhelmed by the staggering number.

When the sirens sounded for the 10k start, it took me about a minute and a half before i could cross the starting line. And the scene was overwhelming. At about the 1 km mark along 34th Street, runners in front of me stretched up to 400 meters jam-packed like sardines and glancing at my back, an even longer stretch, as far as the eye could see was an even greater multitude of bobbing bodies occupying the whole street!

I was just one of those in the clusters who were now gaining some rhythm going at 6:30/km pace when before turning left to the British School, we encountered pot holes and small pools of stagnant water that had many of us slowing down to a walk, skip and hop to avoid stepping on them.

Worst, the 21k runners were now on their way back and were forcibly relegated to the sideways of the narrow road avoiding the rushing 10k runners who were running face to face againts them. This was a terrible choke-point and some bumping ensued, so both sides had to slow down again and give way to each other…a drawback to whoever was aiming for a PR.

I wish the race organizers should have diverted the route. From the start at 7th Street, runners should have turned right to 32nd Street, then make that left turn to 38th towards the International School. That would have avoided the head-on traffic experienced at 34th Street.

Felt great running over Kalayaan Flyover towards Buendia and making the U-turn at Paseo de Roxas i sort of picked-up the pace a bit. However, the climb back Kalayaan flyover had me really gasping for breath when i reached the top. I slowed down to a jog, found my bearing again after a few meters and resumed my pace going to Rizal Drive up to the finish.

I found the water stations adequate, as with many runners who ran the 10k but heard complaints from those who ran the 21k distance, particularly from running buddies Betty, Tonette and Mel who were aghast by the empty water station tables from the 16th kilometers up to the finish.  Good thing they had some small water left in their hydration belts.

My only beef about the race was how the RFID recorded the finish times. I pressed the START dial of my watch when the horns sounded for the 10k start but didn’t cross the starting line until about 90 seconds have passed. But when i crossed the finish, the official time results recorded the time i crossed the finish line, the same time i had with my watch. The 90 second lag time was not deducted from my official time! Seems that this particular RFID only records the time you crossed the finish and not starting from the time you crossed the starting line! Knowing that this was the case, i should have positioned myself near the front, not that it mattered for me but it would have save a minute or two on your over-all finish time.

I was a bit surprised by the sheer volume of registrants at the Adination table booths. When I proceeded at the UP-MOA booth, runners were already crowding the tables to register and get their Passport-for-freebies card. Good sign for the UP-Adination group which will tentatively start on November 9, 2010.

Here are some pictures of yesterday’s pre and post race activities: 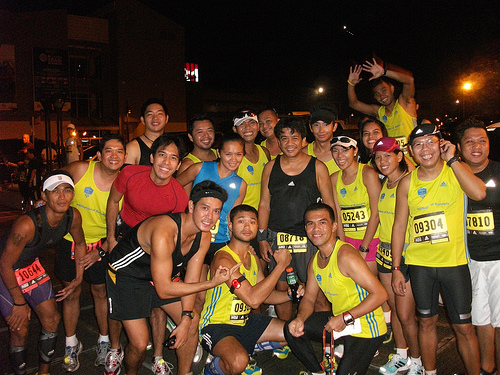 With the takbo.ph group 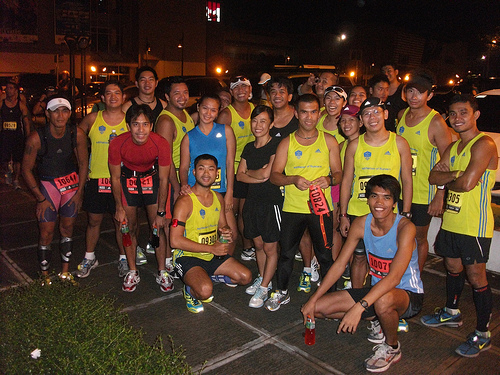 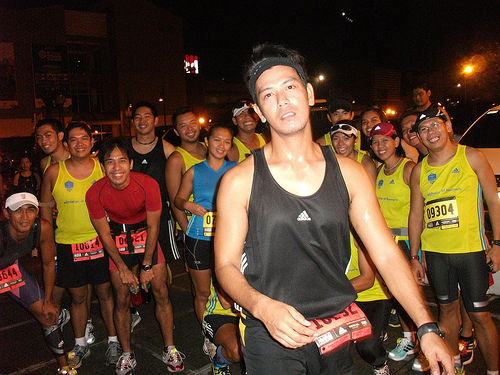 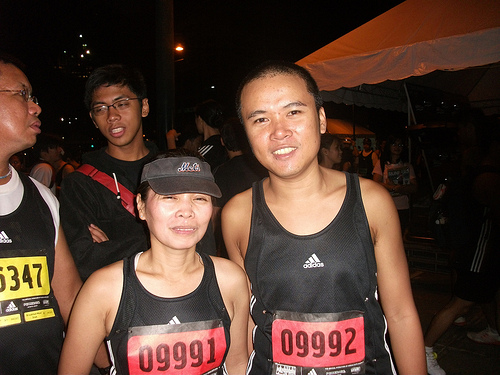 With co-runners at UP, Christy and Jun2

Betty, Pio(lo) and Mel before their 21k start 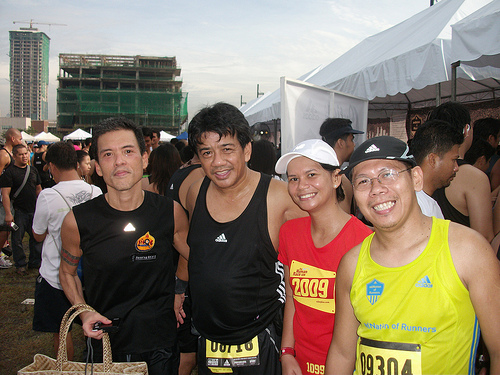 First time i get to talk with the affable Pat Concepcion (http://runningshield.blogspot.com/). Great guy! He talked about the upcoming Condura Marathon but wouldn't confirm if the SKYWAY would still be part of the race venue.:-) On my left is Roselle and Mar 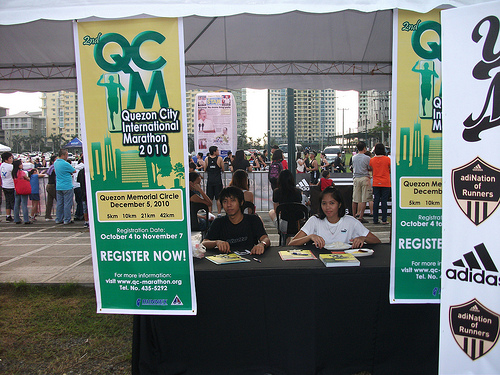 Registration at the Adination-U.P. and Moa booths 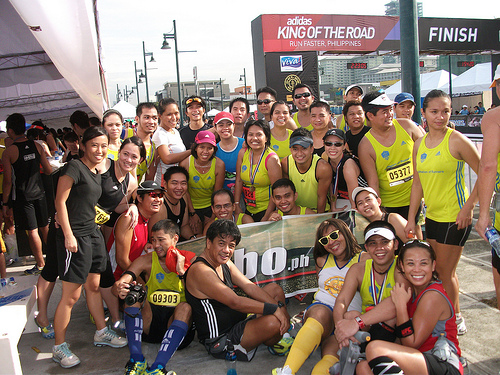 Breakfast at McDo after the run. Clockwise: Tonette, Mel, Yett, Me, Betty and Dante