Used to be that eating the right foods at the right times in the right combinations can give you the boost and energy that you need in gaining optimal performance in running. No more. In an attempt to take nutrition to the next level, new “super-foods” are being introduced to the market for better conditioning and to give you that “edge” among your competitors.

I’m not referring to Oysters or Garlic which we all know are straight-from-the-earth foods that pack doses of health-boosting essential vitamin, minerals and other phytochemicals without having anything else added to them. I’m talking about CHIA seeds. 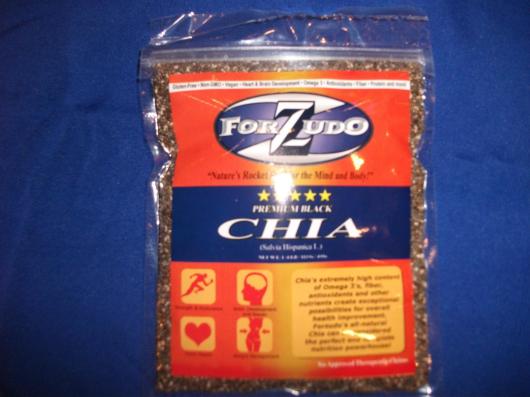 Well documented as one of the energy food of the Tarahumaras, the native Mexican Indians known for their long distance running prowess, it’s touted as one of the oldest and most nutritionally dense superfoods know to man. The seeds of the salvia hispanica plant found mostly in Central America is among the richest sources of the heart and brain-healthy Omega 3 fatty acids. It has been used as a foodstuff, energy booster, and medicine as far back as four millennia and reached its zenith during the times of the ancient Aztecs and Mayans.

I’ve known some runners use it. Betty sprinkles it in her specially concocted fruit juice while Ron puts some in his pasta.

I was able to get hold of a sample during the launching of the product by Ferzudo, a Philippine subsidiary of its main distributor in the U.S., Hidalgo Ventures LLC. Headed by a young entrepreneur, David Bicierro, he explained the benefits of the product which can be sprinkled to any food like on breakfast cereals, jelly sandwiches or can be blended in smoothies, mixed in salads, add to soups or use in bread and pastries.

Gram for gram, here’s what the Ferzudo Chia seeds claim it has:

Pretty impressive if you ask me. I’m not a spokes person or an endorser of the product but what’s to lose if we add a natural food to our diet, used by the ancient Aztec warriors and Tarahumara Indians for their survival, strength and vitality?
–
Another thing good about Chia is that it can be eaten raw and unprocessed. It has a neutral flavor and can be easily added to any sport or energy drink to boost performance. Three tablespoons daily is their recommendation. I’ve tried adding less than a teaspoonful of Chia into my Gatorade and feel fine with it.
–
To learn more about this product, you can visit their website at www.Forzudo.com.