Last Sunday, we witnessed firsthand the staging of the 1st Bataan 102kms Ultramarathon Race as we were tasked to pace Norio Tanaka, a member of our running club, RUNNEX. Norio is a Japanese national, married to a Filipina and has business interests here in the Philippines. He is a veteran of the Boston Marathon (2008). The Bataan 102 Ultramarathon would be his first ever ultra-marathon race. His goal is to finish the race before the cut-off time of 18 hours.

We left Manila at about 5:30pm last Saturday afternoon with Meriam and his son, Ian. We passed thru the newly constructed SCTEX but didn’t enjoy much of the scenery because it was already pitch dark. After making a stop-over at Balanga, Bataan for dinner, we immediately proceeded to Mariveles to meet up with Jay Sabido, another Runnex member who was assigned to pace Norio from the starting line up to KM32.

We met up with Jay at the nearby Jolibee, a stone’s throw away from the starting area and we discussed our assignments for the race. Our plan was for me and Meriam to take-over the pacing chores of Jay once they reached the 32km mark and we had estimated thay they would arrive there at about 5:00am. The rest of the Runnex members would be arriving during that time and would have their own individual pace assignments later in the day.

We initially had three support vehicles to start with, fully stocked with all drinks, food and other essentials to assist Norio and us pacers and more support vehicles would follow suit later. We agreed to bring our cellfones during our run and we wrapped up our meeting with Jay at about 11pm.

We were billeted at the MC Lodging House,  which was situated at about 6.5 kilometers from the race start and along the route of the runners. We had a beer each to induce us to sleep so we could rise up early before our designated 5:00am run. Meriam and Ian got to sleep but i was still awake so i decided to just wait until about 1:00am which was about the time the runners would start to pass by the Lodging House.

Looking back and checking out the race course earlier that evening gave me a sense of what those courageous participants would be facing. The distance alone makes the Deat March one intimidating race. The infamous climb at the early stage from KM2.5 up to KM6.5 would break any runner of weaker ability as the course snakes upward for about 3.8kms until they reach the peak a hundred meters after where we were billeted. The incline is torturous enough and comes at a most inappropriate place, where runners would be just starting to get warmed up.

I got up at about 1:10am and positioned myself at the front of the gate to wait for the first runners to emerge. With me outside was the male cashier of the Lodging House whom i chatted with while waiting. He told stories about life living in Mariveles for the past 18 years, the boom of the industrial town when its Export Processing Zone was thriving and the bust when majority of the production plants had to shut down and transfer its operations to much cheaper labor countries. Not much of the remaining industrial plants are operating nowadays, he laments.

The first sign of runners emerged at about 1:20am when the flashing lights of the lead vehicles were flooding the street, 200 meters before us. Most of the runners were wearing headlights so you would see them approaching 300 meters away like fireflies weaving their way through the dark.

The first leading runners were running at about 4:00-4:30min/km clip and one of them i recognize, Ed Tolentino who is a long time marathoner. Our man, Norio san arrived past us 20 minutes later while his pacer Jay was running beside him and waving at us, smiling.

I waved back and shouted a crude encouragement, “kaya nyo yan, 95kms nalang!” (you can do it, just 95 kms to go!) The first woman runner i saw was Ellen Tolentino who was running with Indonesian Jerry Karundeng aka “highaltitude”. i then saw familiar faces afterwards like race organizer, Sir Jovie Narcise (Baldrunner) and Jonel (Bugobugo) who came much later. The gap of the first runners from the last ones was approximately 2.5 to 3kms from my vantage point (6.5kms). 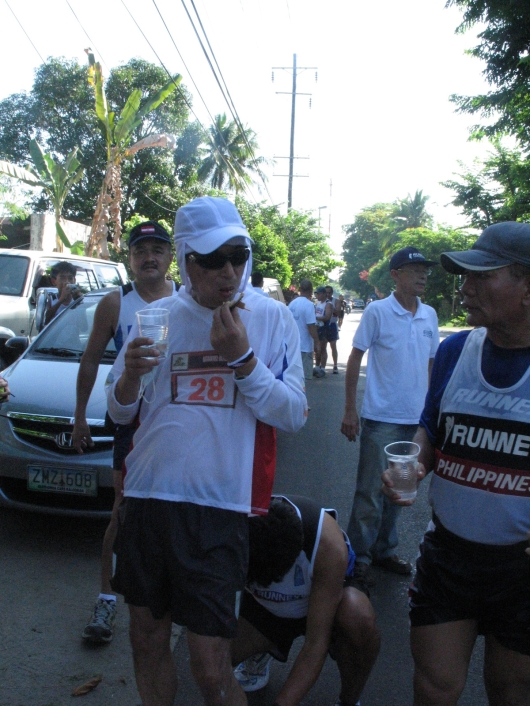 Norio san in one of his eating breaks

I was roused from my bed by Meriam at about 3:45am when she told me that Jay called to inform us that they were going to hit KM32 at about 4:30am which is 30 minutes ahead of our duty run. so we had to rush up and change to our running gears to be able to catch up with them before KM32 which is the point Jay would drop-out and we would be taking over the pacing chores.

We were able to leave the Lodging House at about 4:15am to rush to Limay nearing Orion (KM32) which is a good 20 mins drive. While on our way, we would receive calls from Portia (Jay’s wife) who was in one of the support vehicles keeping track of the runners. She would ask the time we would be arriving and giving instructions on where Norio and Jay were situated.

i then instructed Portia to tell Jay to drop-out immediately as we would replace him as soon as we arrive. A few minutes later, Portia would call again informing us that Jay would not drop-out until we arrive and they were now in KM34. So we really had to step on the gas and finally reached Portia’s support vehicle. She instructed us to turn right from the National Highway and after 5 minutes saw Norio and Jay at KM35. Finally! They stopped and walked towards us as we immediately alighted. At this time both had run a total of 35kms, starting their walking breaks at about KM32. Nice run, Jay!

Without giving us time to stretch, Norio suddenly breaks into a run which i felt was like a sprint (about 4:15 pace) for about 800 meters then slows down the next 300 meters at about 5:30 pace then slower to 6:00 pace for the next 100 meters then walk at a brisk pace. He was employing the Galloway method.

It was during these walks that our support team would approach and offer us energy drinks and food or anything we want. For the first 5kms of our pacing, this was our routine, the 800 meters sprint, the 300 meter slower pace, the 100 meter much slower pace then the brisk walk which would last to about 100 meters.

i was so relieved every time we walked because it gave me reprieve from the initial shock of the sprints. And it was a good workout for me because i was like doing interval training!

If this was Norio’s race strategy and had figured it out for some time already, I didn’t want to change anything that he might have practiced at so maybe it was best to just follow his pace, initiate conversations and keep his spirits high.

From the 6th km onwards, the run became smoother for me and Merriam because we were now properly warmed-up and we got over the initial jolt of running with ice-cold muscles. We would now sometimes take the lead in pacing and Norio would follow.

Norio had 3 other shoes to change with in his support vehicle and he brought with him about 2 dozen pair of newly bought socks. He had a wardrobe of dry-fit shirts, nip guards, ben-gays, sun blocks, fruits, energy bars/gels/drinks…the works! He came fully prepared. He was ably assisted by his Filipino wife, Marge and a son.

Our route took us from Limay-Orion-Pilar-Balanga. From the time we reached Pilar, the sun ws already up and about. On our 16th km (KM51) we saw another member pacer, Max who was fast approaching and joined us on our way to Balanga. At KM52, we now were swamped by a phalanx of Runnex members waiting for us, ready and eager to take over the pacing chores from Meriam and myself. 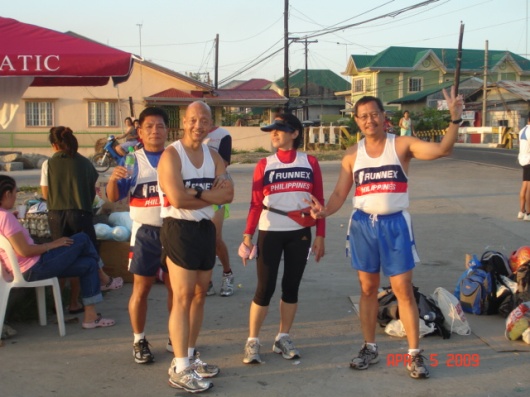 Part of our relievers 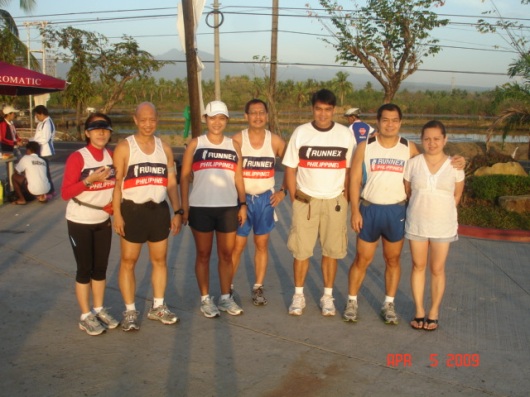 Photo-ops before their run 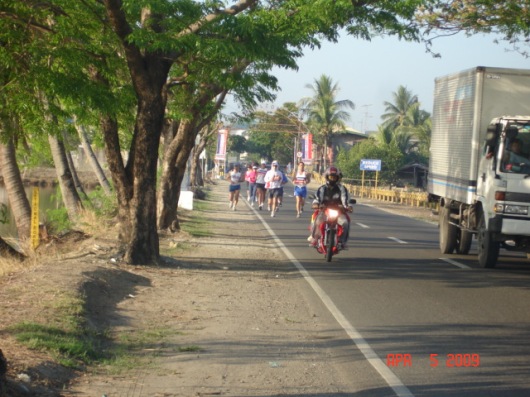 The pace group somewhere along Pilar

We now would run together for another kilometer and since the sun was already piercing our skins, we gave way to the new set of pacers as Meriam and i boarded the support van of Portia and enjoyed some cold drinks and food. It was a nice 18k workout for the both of us. by this time, we had 7 support vehicles assisting us.

It was sort of an over-kill for a support group. Well, not necessarily exclusive to Norio but for us, the kibitzer-pacers who wanted a piece of the action or should i say a piece of greatness which was bestowed exclusively for the runners that joined this great race! 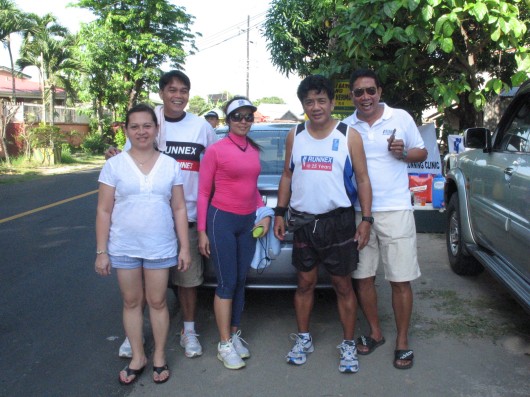 Meriam and jazzrunner posing with others after our pacing run 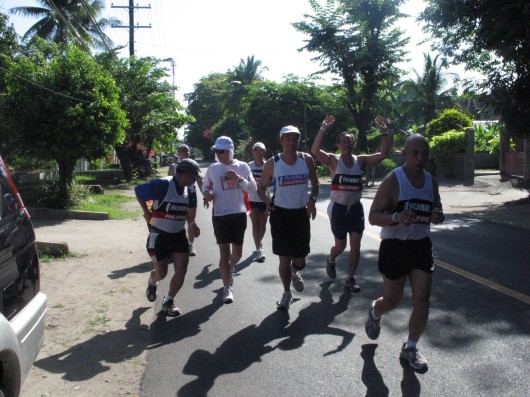 Norio san and his pacers at Balanga 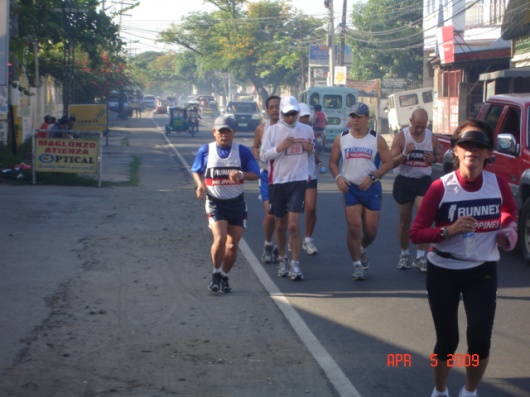 Glenda, a nurse leading the pack, while two doctors, Doc Lito and Doc Benny are at Norio’s leftside just in case medical help would be needed.  Bambi, with cap at the back is also a nurse. 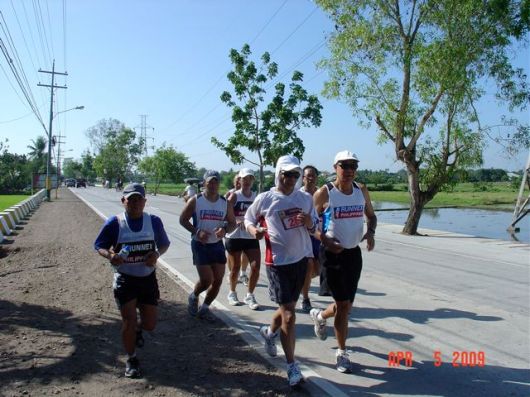 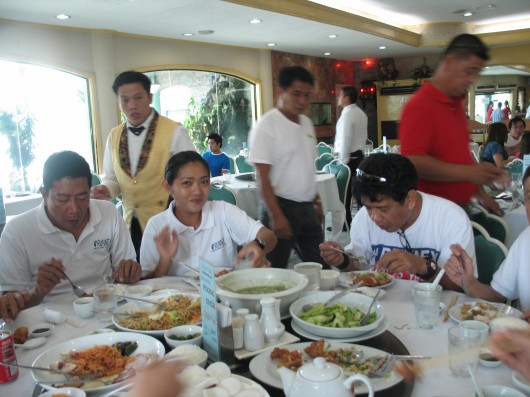 During lunch time, we left the other runners to pace Norio while we hurried on to San Fernando, Pampanga to take our lunch at the Fortune Seafood Restaurant. 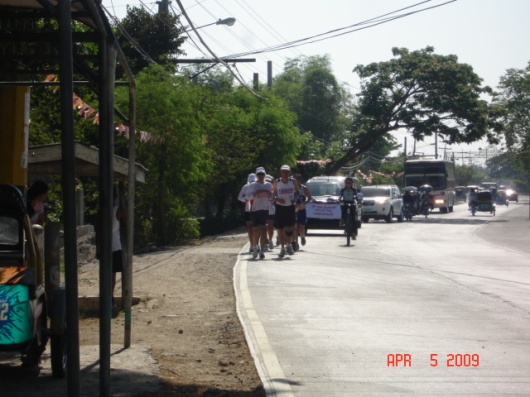 After our lunch, we found the runners at Lubao, Pampanga and immediately joined them 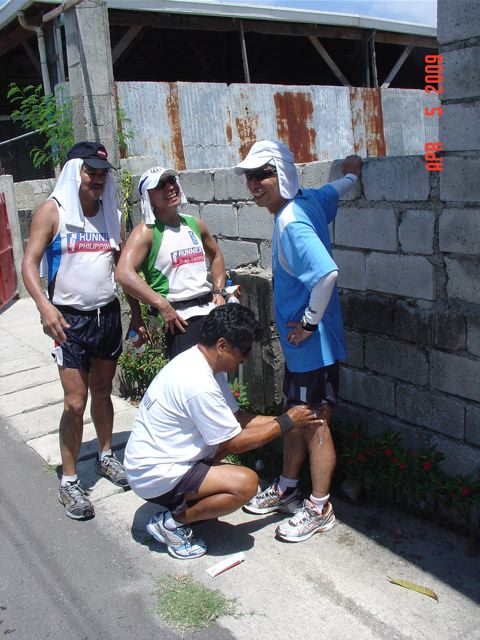 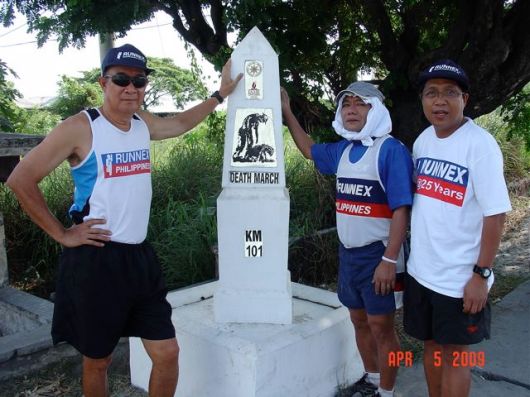 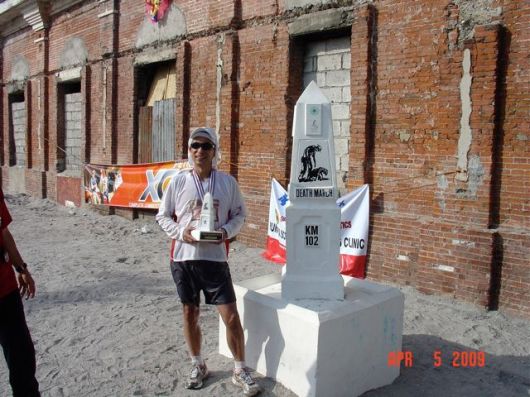 Norio making it to the finish in about 16 hours. Posing at the finish line (KM102) with trophy 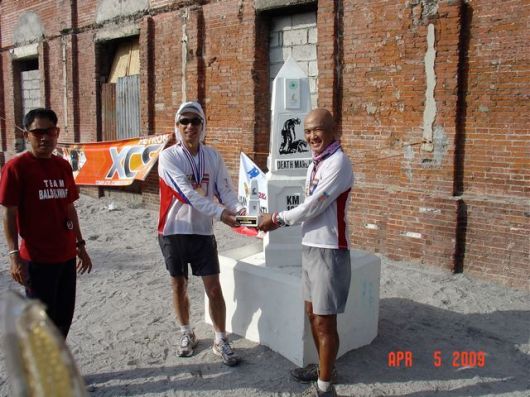 With Race Organizer, Sir Jovie, aka “The Baldrunner” presenting Norio his trophy 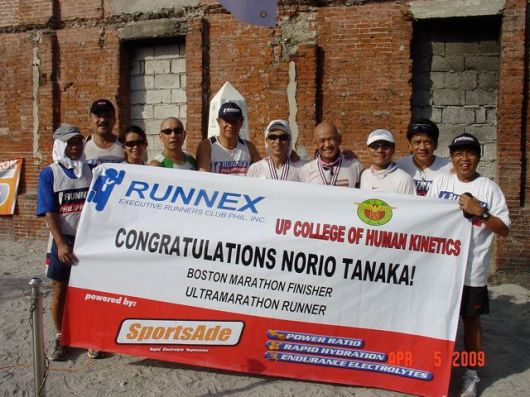 Congratz to Norio san, to Sir Jovie and to all participants of the 1st Bataan 102 Ultramarathon race!