I thought i got to the wrong location but finally found where McDonald’s branch along Valero was which was at the back of the Eastern Telecoms Offices at RCBC Plaza. It was about 6:30pm. The occasion of my discovery was a video shoot for the Kenny Rogers Roasters website to drum up their URBANITE Run this coming August 15, 2009 at Fort Bonifacio. I had earlier received a text message from Marga Baula, a member of Takbo.ph runners to be present at the video shoot that night.

At McDonald’s, (ironic choice to meet for a Kenny Rogers occasion) i was greeted by a dozen of my co-running addicts from Takbo. I’ve never been greeted and smiled so much and it was nice to meet the new faces i’ve only seen and heard. It didn’t matter if i almost got lost looking for the place, only that i should be wearing my Takbo singlet already. The comfort rooms inside the resto were full so i had to change to my running attire inside Carina’s car at the parking lot which had tinted windows. Thanks, Carina!

Runners began arriving, some coming direct from their offices, the others from home. It swelled to about 65 members. We were all now at the parking lot fronting McDonald’s and the pre-shoot warm up consisted mostly of commenting on our new set of uniforms, when the next LSD will be, the Q.C. Marathon this October, the BDM Ultra race next March and about the latest in running shoes. As always, there were lots of picture taking, laughing, good natured badgering and some more picture taking.

Finally, after about 1 & 1/2 hours of merry making while waiting, the video cameraman arrives and we were led unto Valero Street and the herd began to move. Mr. camera man began shooting from his video and took footage’s of the group vaulting into the streets of Salcedo Village while we were running alongside vehicles, some honking the “Cory, Cory” cheer, thinking this was another tribute run for the late President. We were running at a 6:00-6:30 pace. Two hundred meters before reaching our first loop, there was a mad scramble back to McDonald’s which would have shamed Haile Gebrselassie had he seen the dash of the runners in record breaking time!

The Forefoot and Jazzrunner's shoes

We broke into a jog as we reached the starting point. The time of the run was 11 minutes and 55 seconds for the 1.8 loop. Mr. Camera man who was riding in a motorcycle stopped. “Tapos na,” he said. We were finished. After running on a 1.8 km loop in 11:55 minutes and making us wait for 1 & 1/2 hours for the video shoot to start, we were finished? Sheesh!:-)

End of the run

Not one runner seemed unhappy about the abrupt ending but some decided to run another loop. Since some of us had already ran that morning, we decided to just stay put and wait for the others as they continued with their run. When everybody had re-grouped, we all went for a late dinner at the nearby Tokyo-Tokyo restaurant where we had their usual pseudo-Japanese food–all in celebration!

Time to go to Tokyo2 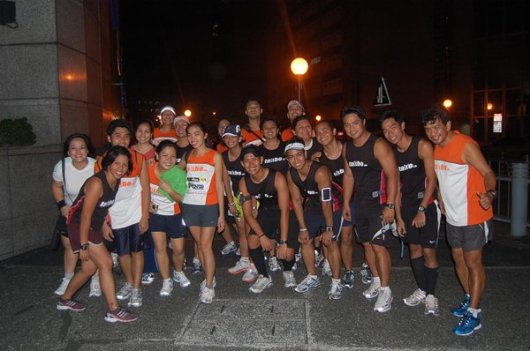 I hope to see you all at the Urbanite Run on August 15. We’ll run the whole 10k or 15k as fast as we want to and i’ll buy you a KR meal after the race. Just bring your meal stubs!:-)

(Pics courtesy of Rodel (Argonaut). Thanks!)