Santa came knocking on my door this Christmas and left me one of his small sacks which contained some running shoes, well just two which was for me to review and post in this blog. I got Skechers’ new running shoe, the GO RUN and the New Balance 880. 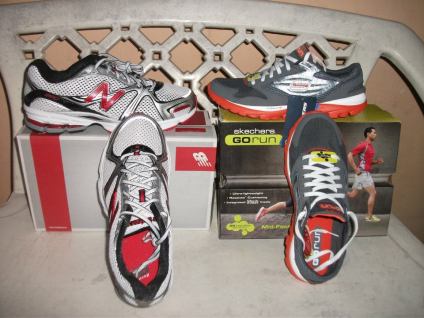 I’m not going to give a comprehensive review on these shoes just yet as i’ve just wore-tested them at home and outside just to get the feel of it. I couldn’t resist to try the GO RUN shoes though, as i was curious about the review given by top American marathoner Meb Keflezhigi who wore the Go Run in setting his personal record of 2:09:13 and placing 6th at last month’s New York City Marathon.

The shoe just weigh a 7 oz. on my size 10 feet and felt feather-like as i warmed up for an 18 km run. There’s a bit of a “lump” on the middle of my arch or under the midfoot which sort of softened the impact. The rocker stance is less pronounced here than their SRR or Liv models and the usual cut-off under the heels is still present to encourage a mid-foot strike which it did, exactly like the LIV model and that’s coming from a heel striker like me. 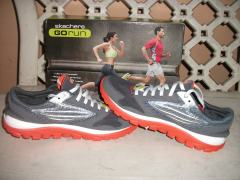 The 18km run was a bit of a mixed feeling.. soft, light  and very comfortable although i was consciously landing on my mid-foot all the time which takes a while to get used to. I like the wide toe box and the fit was excellently snug. There was enough cushioning on the shoe although i wish they would have put more of it in the forefoot. The downside of it though was after the run, i felt some heat below the big toe and had i ran 2 kms more, i would have developed a blister at the big toe mound. I should have applied a lubricant or a petroleum jelly as i usually do when trying out new shoes.

Aside from this minor discomfort, i found the shoe very responsive, a definite shoe for racing or fast paced training. Light and fast-paced runners will definitely like its soft underfoot and spring-like response upon toe lift.

I’ll be making a comprehensive review once i try this out on different surfaces and get more mileage on it. But judging from this initial test run, Skechers might have already delivered a winner. The shoe brand is getting serious with their running!:-)