As i look down at my left foot today, i take notice of the scars that years of running had done. The endless pounding on pavements, trails and every conceivable surface has now taken its toll..an injured foot or a painful heel spur, to be more specific.

It looks like it just had been crushed by an asphalt roller and had to be plaster-casted at the National Orthopedic Hospital. And it looks gross. Ugh! 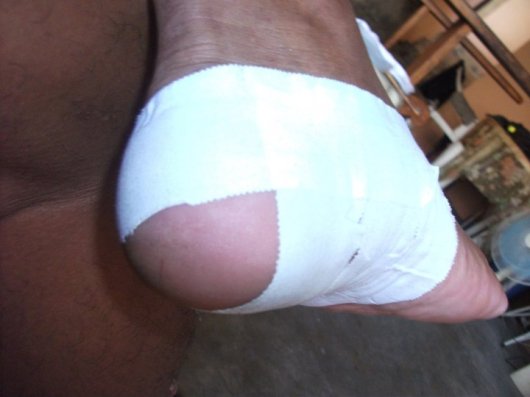 Actually, the plasters are just ordinary athletic tapes that runners with Plantar Fasciitis or heel spurs apply to secure the foot in place and preventing the arch from collapsing unnecessarily. I also use a silicone heel pad to further cushion the pounding and lessen the impact.

At times, i also use a KT Tape (generously provided by running mate Betty) and the ever popular and inexpensive masking tape which does a good job, as well. There are so many ways to tape the feet and you can search it on the net, particularly at YouTube.

Well, it doesn’t look as bad as it seem and the feet are just remarkably fine though i feel the tinge a bit if i run beyond 10k. My Plantar Fasciitis has actually healed but it’s the heel spur now that’s been causing all the discomfort and needs to be treated.

I’ve been in some form of a therapy and i visit a PT twice a week which has been on-going for several weeks now. There’s no sure fire treatment to a heel spur unless you want a cortisone to be injected or subject it to surgery to remove the bone growth.

It’s been a week and a half since i ran last and that was at the Run With the Masters race at Roxas Blvd.  It’s been the longest time of rest i had from an injury so i had to see and check the progress. Met up this morning with the usual suspects of Betty, Tonete, Leo and Sylvia at the Meralco Compound at Ortigas Avenue. 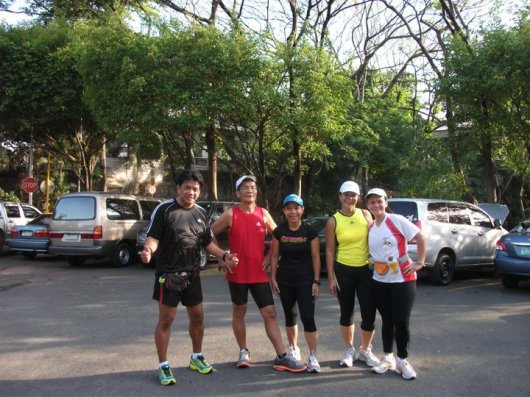 The group at the Meralco compound

I have since gained another 4 lbs in 2 weeks and had to adjust my belt bag to loosen it which i had not done for several years now. What the heck!

I arrived late at Meralco as the group had just finished running 6k so i joined them for the rest of their run.

I felt quite ok and at the end, i finished 5.5k in around 36 minutes while the guys did more than 10k. It was a nice, good easy run and it’s something as a surprise for me as the foot didn’t hurt at all.

Hopefully, the foot will be more ready the next i run the “Run With The Doctors Race” (here) or the “World Youth Day Fun Run” (here) this Sunday and leave the scar behind.

I nudged myself up early this morning to join Betty and Tonette on our regular Thursday run at Ortigas. Hadn’t run since our LSD last Sunday and i’m feeling guilty about it. As always, by the time i reach Mercury Drug along Meralco Ave, i’m all drenched in sweat as i get a head-start of 6kms before we all finally get to run together.

We chose one of our favorite routes–that is inside the MERALCO compound where they have a 2.5 km loop with mild inclines, a small community of joggers and almost no vehicles to contend with. However, this morning was going to be different as Betty gave a heads-up of a dirt track that was just inside the vicinity which is hidden from the usual loop. As Tonette confirmed that there really is a track located at the back exit of the gym, we all decided to check it out. 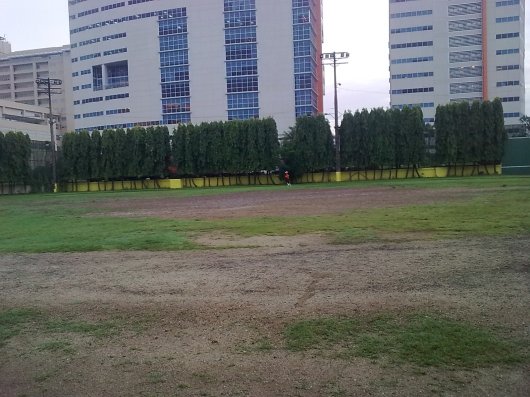 The Capitol Medical Center in the foreground

Betty and i were surprised to see the dirt track and the only way to access this is by entering the main Gym and walking through the back exit. Though the track itself is of dirt and rough sand, it is very well maintained and the sand seemed to absorb the water very well despite the continuous rains in the area. However, this is not your regular 400 meter standard track oval found at other Sports centers but is merely around 250 meters in circumference.

Aside from the three of us, there were no more than five other joggers who were using the track. The surface was soft and is conducive to fast running. Betty and i did a series of 3 x 1km at around 6:00min/pace and around a dozen 150 meter sprints. I really felt good all throughout the run although Tonette had to take it easy because of a bum knee. Betty likes to kick butt and she sure kicked mine as she was smoking around the track as if there was no tomorrow! 🙂

It was a great run and the fun didn’t end there as it continued through Betty’s breakfast table where we had gourmet coffee with bread and corned beef hash! Thanks, Tita!

This is now going to be a good alternative to our early morning, once-a-week runs at the Ultra since the latter is now off-limits from 4am–9am until December. Nice running—nice start of the day! 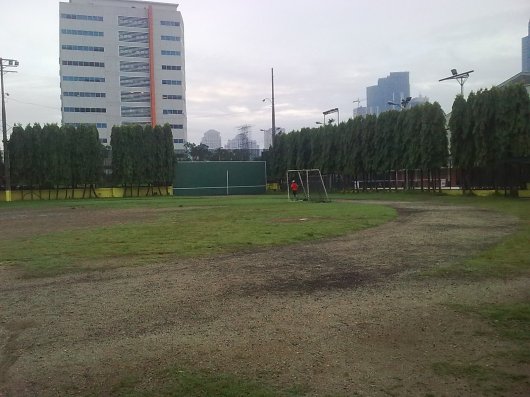 The track's south side 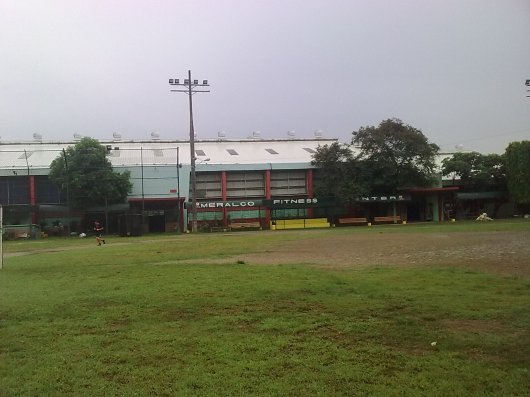 A view from the other end

Going on her own